And we’re back! What did we miss?

Yes indeed, after a few solid weeks of rest and relaxation, travel, and a slew general summer activities, PolitiPop is back and ready to bring you the best in politics and pop culture.   Looking back at the news from our time apart its pretty clear — the apocalypse may very well be upon us.

Ok, I’m exaggerating, I don’t believe in Revelation’s, but here’s a few stories from the last couple of weeks that could make one think (wish?) it were the end-of-days:

– Congress and President Obama finally came to a deal on raising the debt ceiling… by leaving the “job creators” (a.k.a the wealthy folks) alone with their cash and slashing federal spending, with the promise that more cuts are to come at the discretion of a Super Committee, where entitlement programs, like Medicare and Social Security, and the defense budget are all on the table.

– Following up the debt deal the U.S. loses its AAA rating from S&P; it’s unfortunate for Obama that this happened on his watch, but with outrage set firmly against the ratings firms (who are said to have botched calculations) and Congress’ petty bickering along party lines, it seems like the blame is being pretty well spread around.

– London’s burning; this is not a reference to The Clash.

– Texas Gov. Rick Perry throws his ten gallon hat into the ring for 2012.  Back in June, The Texas Tribune ran a very informative piece detailing why the Republican and frequent First Amendment violator, should not run for president.  Why God, why?

On the upside, if you want to call it that (and I do, I loved the movie), Harry Potter and the Deathly Hallows, Part 2, grossed over $1.2 billion worldwide, making it the 3rd highest grossing film of all time.  Moviegoers flocked to the theaters to watch the wizarding world finally break free from He Who Must Not Be Named, briefly escaping the endlessly depressing news reports inundating every facet of our lives, but our Muggle troubles are nothing compared to what the Ministry of Magic is now facing post-Voldamort.  Foreign Policy ran a fascinating piece looking at the long road ahead for the wizarding community.

Finally, I spent last weekend in Chicago, attending the city’s yearly music festival Lollapalooza.  Despite the torrential rain and the ankle-deep mud, acts like the Foo Fighters, DeadMau5 and Cold War Kids played on for the dirty-yet-enthusiastic crowds.  One performance that stood out was Damien Marley and Nas; their plea for unification was moving especially in the song, “Leaders,” when they asked for all to stand up and lead, not just in politics but in life, singing, “Oh leaders, let’s all change the world.”

And then, I kid you not, a rainbow appeared. 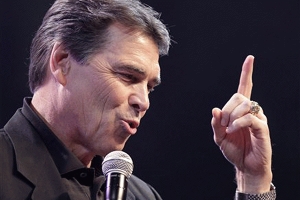 In America we love our competition reality TV, and with the big showdown coming in 2012, the lead-up to the presidential elections has yet to disappoint. Of course, it’s the GOP we’re all watching; it seems like the field of players grows every week, and every week one of them says or does something that makes you wonder if this whole thing is scripted and the GOP is making a Oscar-worthy documentary, Joaquin Phoenix-style.

Touting his state’s booming economy and job growth, Perry believes that it is his fiscal leadership that has led Texas to recover faster than many other states. In a June appearance on Fox News, Perry claimed that Texas jobs accounted for 48% of the total number of jobs created in the US since April 2009. Politifact found the claim to be neither completely true nor completely false; stats on job creation in Texas are heavily disputed, ranging anywhere from 18% to 54%, depending on the time frame and who you’re talking to.

There’s no denying that Texas’ economy is doing well, but the growth comes at a price; Texas reportedly added over 211,000 jobs in 2010, 76,000 (37%) of which paid at or below minimum wage. In a New York Times Room for Debate discussion, “The Texas Jobs Juggernaut,” editor of The Texas Observer Dave Mann writes,

Texas now leads the nation in minimum-wage workers (550,000 in all). That hasn’t improved our income inequality. Despite the good economy, Texas remains a state of extreme wealth and desperate poverty. The low-tax structure means the state is chronically short of money and, this year, saddled with a huge budget shortfall. Social services and public schools are woefully underfunded. Our graduation rate is low, our dropout rate high. One in four Texans lacks health insurance, by far the highest percentage in the nation.

Mann explains that many of the driving factors of the state’s economic boom—”inexpensive cost of living and low-tax, anti-regulatory policies “—preceded Perry’s arrival to the statehouse and will remain after he’s gone.

What is most fascinating (and disturbing) about Perry singing the praises of his own economic prowess lays in his ultimate plan for fixing the US economy: God.

Last time I looked, God was not a financial planner, so it doesn’t matter much that Perry thinks he has a direct line to the Almighty ever since He “called” upon the Gov. to help fix America after us damn liberals came in with our crazy socialist ideas, wanting to close the wealth gap and insure all citizens equally. Besides, not even God would be merciful enough to take a cabinet position to fix this mess, as one commenter posted on New York Magazine‘s website in response to Perry’s pronouncement, “God is like, ‘no thanks man, I’m cool.'”

What we talk about